The Atlanticists: A Story of American Diplomacy 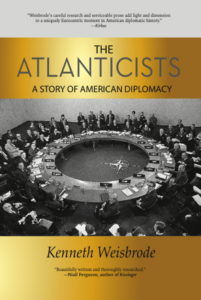 The Atlanticists
A Story of American Diplomacy

The Atlanticists is the history of the American commitment to Europe in the twentieth century as seen through the eyes of the personalities who made it. Such commitment did not emerge serendipitously. It was carefully constructed and cemented by a network of diplomats and politicians that imagined, built, and sustained a new international system centered on the Atlantic. In their vision, America and Europe were essential parts of a single, cooperative community, not rivals or one another’s periodic savior. Historian Kenneth Weisbrode reveals–for the first time, warts and all–the insider’s story of the people who built this community. Ironically, and perhaps auspiciously, Weisbrode’s look back at the creation of this important alliance comes at a time when U.S.-European relationships are straining, and in very real danger of coming apart.

Kenneth Weisbrode is Assistant Professor of History at Bilkent University.

”… reminds us how important the transatlantic relationship was during the twentieth century and of all the hard work that went into it on the part of many devoted public servants. This book also contains important lessons about diplomacy that remain highly relevant today.” — Brent Scowcroft, former National Security Advisor to presidents Gerald Ford and George H. W. Bush

”Ken Weisbrode has written an outstanding book on America’s diplomats and politicians who made and shaped the transatlantic alliance in the post-1945 era. The volume is highly readable and entertaining. The different personalities, their many idiosyncrasies and personal and political feuds and friendships vividly come to light. The reader is gently taken by the hand and presented with the fascinating manoeuvrings and visionary thinking of a plethora of leading statesmen that have shaped the contemporary world. This is a very important and enriching book. It helps us to understand the Atlantic world of the past and indeed the present.” —Klaus Larres, Richard M. Krasno Distinguished Professor of History, University of North Carolina at Chapel Hill

”Weisbrode’s book is bold in its sweep, covering the complex diplomatic interaction between American and European diplomats throughout the turbulent twentieth century. The book is grounded in thorough research conducted in multiple archives on both sides of the Atlantic. The analysis is astute. The judgments are judicious and persuasive. The concepts and interpretation are compelling. The elegance of the writing, the vivid portrayal of scenes and personalities, and the overall thoughtfulness make this book a treat for scholars and general readers alike. This impressive book repays careful reading while satisfying highest standards of scholarship.” —David Mayers, Professor of History and Political Science, Boston University

”Few books have opened up new levels of diplomatic research as successfully…. This meticulous study interweaves the public and the private, the high and the low with an ease that belies the amount of scholarship that went into it. The result is an innovative and inspirational ‘new look’ at transatlantic politics, from the view of those at the coal face. All round, it is a major achievement in 20th century transatlantic studies.” —Giles Scott-Smith, Chair of the Transatlantic Studies Association, and Ernst van der Beugel Chair in the Diplomatic History of Transatlantic Relations since WW II, Leiden University

”… sheds fascinating light on the role of a key institution in the formulation of American foreign policy in the twentieth century. From World War I to the Cold War, the Bureau of European Affairs played a crucial part in bridging the Atlantic, sometimes leaning against the inclinations of the presidents and secretaries it supposedly served, always ensuring that Europe remained central to American grand strategy. Beautifully written and thoroughly researched, Weisbrode’s book not only rescues four generations of diplomats from the condescension of posterity; it also delineates the crucial role of the State Department bureaucracy in shaping American foreign policy.” —Niall Ferguson, author of Kissinger

”A gem of a book” —Martin Walker, Internationale Politik

”…quite simply, the finest, most balanced work of diplomatic history that I have read in many years. . . . Scholars of American diplomatic history and international relations will find themselves and their students well served by this book’s archival and textual richness. And practitioners of American diplomacy will have the added pleasure of reading a work that recognizes the importance of their work, not only in EUR but throughout the State Department and around the world.” —Edwina S. Campbell, Foreign Service Journal

”The author has the skills of a novelist in presenting all his material about who the players really were, what they thought about foreign policy issues before them, and how they got along–or did not get along–with one another.” —Alexander J. Groth, Israel Journal of Foreign Affairs

”It sounds a bit like the plot of a best-selling conspiracy theory novel: deep within the State Department there exists an elite group of largely Ivy League diplomats who, generation after generation, have been sedulously encouraging ever greater European integration. . . [a] well-researched and well-written book.” —Andrew Roberts, Commentary

”Many books have been written about the presidents, secretaries of state, ambassadors, and wise men who fostered the transatlantic partnership over the past half century. Weisbrode retells the story from the bottom up, focusing on the diplomats in the State Department’s European Bureau. Until recently, many of the bureau’s members viewed themselves as more politically astute and culturally refined than average diplomats… [a] carefully documented study…” —Andrew Moravcsik, Foreign Affairs

”Intriguingly nuanced, personality-driven narrative of how Atlanticism flourished as a result of individual efforts. Such perspective adds texture to the chronology of the Cold War. This expertly researched narrative offers insight into the minds of those ‘small but powerful’ actors who had the innate sense of place to create and maintain a framework of US diplomacy’s finest hour. Recommended.” —Choice